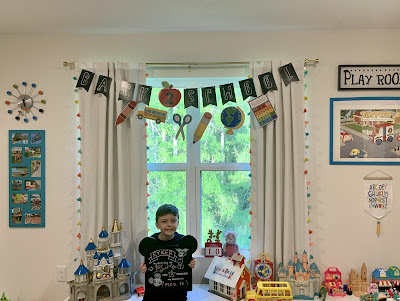 Presley’s Little People Blog started out as a way for our son Presley to document his Fisher Price Collection; as Presley has grown up (he’s in High School!) he has welcomed his Little Brother Ryker into the fun of collecting and Playing with classic Fisher-Price Toys! Ryker recently had the first day of First Grade, so he took some pictures among the playroom…filled with Fisher Price and Disney Toys! Fisher Price toys are great for sharing and stand up to generations of use! 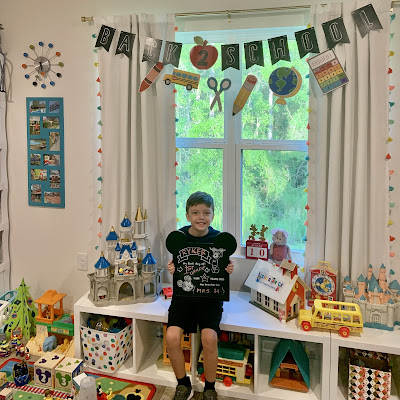 Posted by Prescott Rymon at 4:37 PM No comments:

How about a career in ARCHITECTURE: I “fixed” the Cinderella Castle Monorail Toy 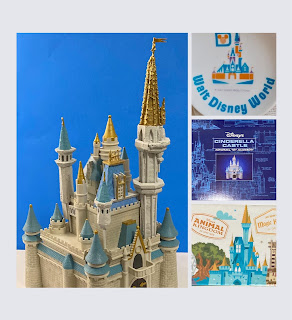 What happens when you combine Fisher-Price toys with Disney Magic? You get the Happiest Playroom on Earth!


Little Brother Ryker has joined Presley & Dad in the toy collecting fun. His favorites are Disney Parks toys and he loves combining it with our Fisher-Price Collection.  Our collection of Fisher-Price toys became the foundation of our "Playroom Theme Park Resort".

Ryker started his Fisher-Price Collection with newer "Magic of Disney-Day at Disney"style sets. He has Mickey's Toontown playsets, popcorn cart, souvenir stands and a Castle-Main Street playset with fireworks.  At first they were set up on the carpet in the living room.

Presley got this Disneyland Castle at Disneyland years ago and now Ryker plays with it with our Fisher-Price Little People Family.

When Ryker started to like wooden train toys we set up some old Thomas The Tank toys for him. 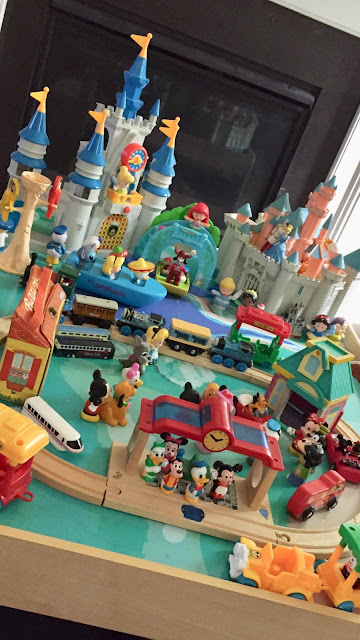 Eventually we combined the Thomas the Train Toys with the Disney & Fisher-Price toys on a train table. 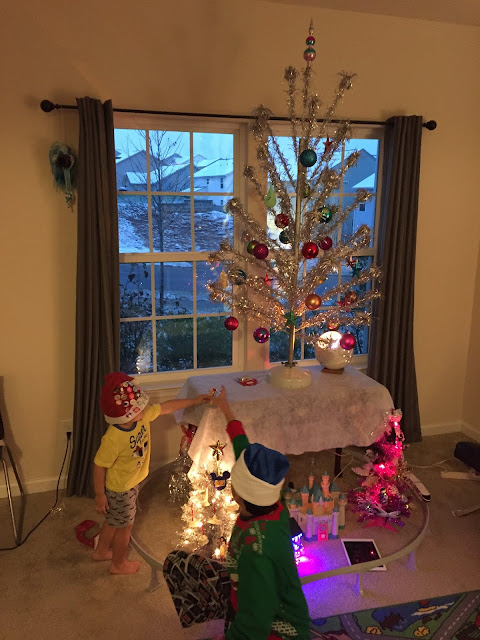 For Christmas we would set up our Disney Monorail Toy & Disneyland Castle.

When Christmas was over the tree was put away but the Monorail stayed out...and accessories started to spring up around it.

We had Disneyland with the push trains on the train table and Disney World with a Monorail on the den floor. At some point we combined it all into one giant Playroom Theme Park Resort! 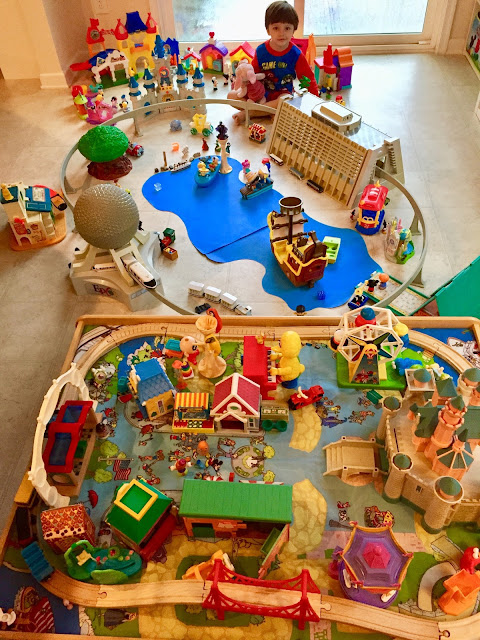 Our Playroom Theme Park Resort includes a monorail around a pirate lagoon with a Disney's Contemporary Resort & EPCOT Spaceship Earth accessory. Look closely and you can see the Tree of Life from Disney's Animal Kingdom! Our Main Street has Disney Store Fur-Tail Friends playsets which have just the right victorian gingerbread look to them...like real Main Street only toy style! We also have some Hasbro Disney Theme Park playsets...a carousel, the hub, and Small World.  Lately we have expanded our transportation options with a Disney Parks Tram, theme park vehicles, and Lionel Ready to Play train sets. Our resort is populated by all sorts of Disney figurines, Little People & Playskool figures...all are welcome who come to this happy place!

Posted by Prescott Rymon at 1:10 PM No comments: 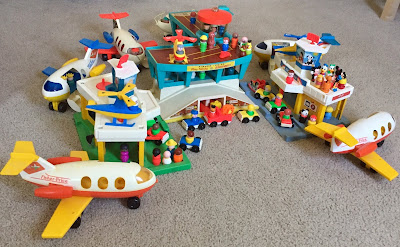 Set up 3 FP airports (one 1970's play family and 2 Little People 1980's) and you have your own three terminal international airport!  The driveways even match up! Your flight to adventure is waiting at any gate!

Each Airplane here has some variation, and the 2 1980's play sets have variations as well....part of the fun of Fisher-Price Collecting!
Posted by Prescott Rymon at 12:40 PM No comments: 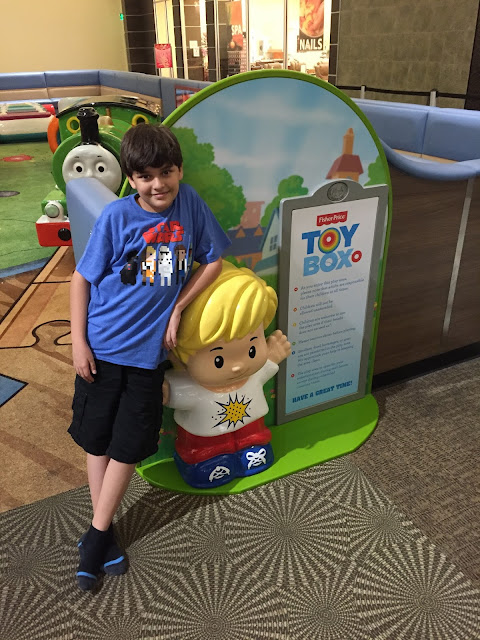 We found three Fisher-Price Mall Playgrounds in the Carolinas.  Here are pictures of the boys (Presley & Ryker) exploring the giant Toys.  They are modeled on the newest versions of these classic favorites...a Little People Farm, a Rock A Stack, a Xylophone, and a Chatter Phone. These playgrounds were found in Myrtle Beach, South Carolina, Asheville, North Carolina and Winston-Salem, North Carolina. Hope you enjoy looking at the pictures as much as they enjoyed playing on the Toys! 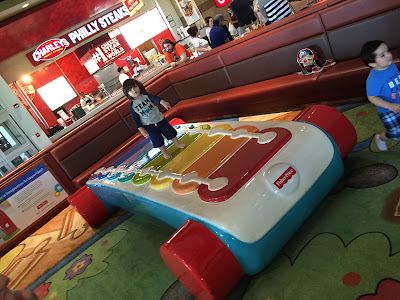 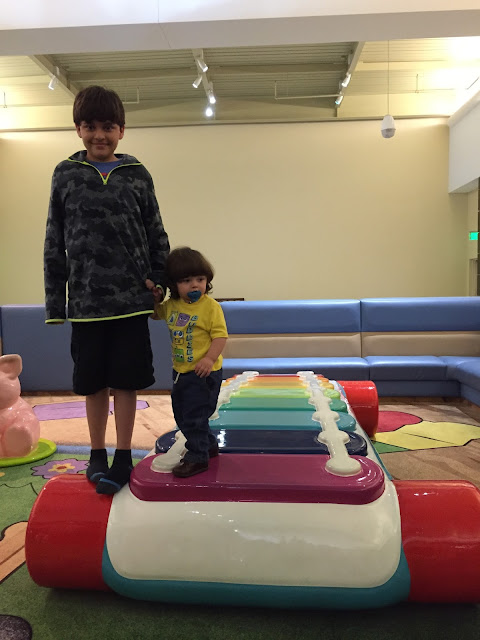 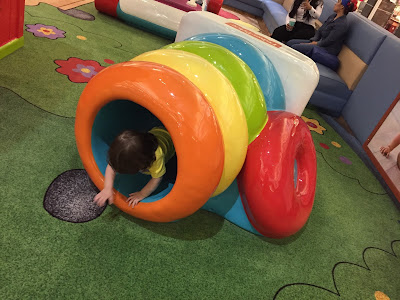 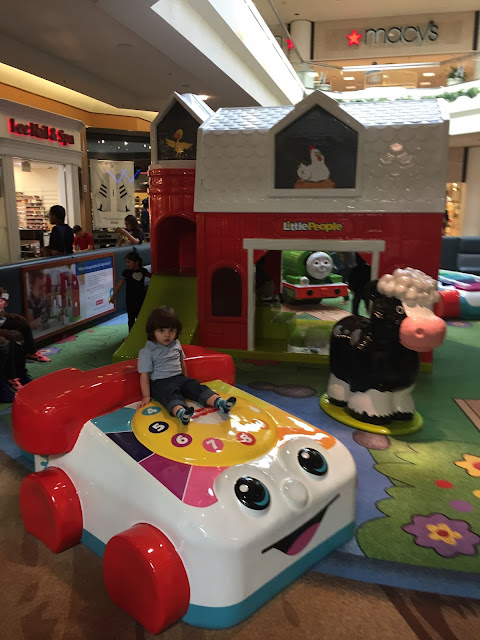 Posted by Prescott Rymon at 1:29 AM No comments:

Me and My parents were born in California so we did not go
to Walt Disney World till I was 10. When I was little I used
to go to Disneyland all the time. My first trip was during
the Disneyland 50th Anniversary celebration in 2005, I was 4
months old!
Disney World is very different from Disneyland,
it is much bigger. We have stayed at the Pop Century Resort.
The theme of the resort is the 20th Century and it has
amazing giant props and toys all over it.
Today we are
talking about the Magic Kingdom!  To get to Magic
Kingdom you must first travel past other Disney Hotels and
theme parks. You have to take a ferry or a monorail across a
beautiful lake to get to the park. The ferry ride is one way
to take in that Disney Magic. We had so much fun and always
want to keep going back.
On our 1st trip we ate at the
Tortuga Tavern in Adventureland. The food was good, I had
the tacos because they are my favorite food. I gotta say my
favorite ride at Magic Kingdom is probably Space Mountain.
One of my favorite memories of going to the Magic Kingdom
was getting my embroidered Mickey Ears! On that trip it was
my little brother's first haircut, I joined him in getting a
haircut at the Harmony Barber Shop on Main Street USA.
We found this 1980's Playmates Toys Magic Kingdom Castle
Playset a long time ago.
It is one of my little brother
Ryker's favorite toys. In these pictures we set it up with
New Fisher-Price Little People Magic of Disney Toys.
Posted by Prescott Rymon at 11:01 PM No comments: 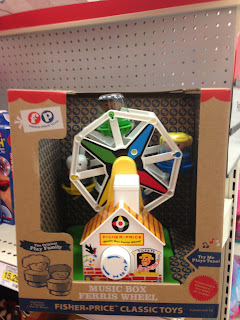 We found this at Target. It is based on the original Music Box Ferris Wheel.  Only this version includes "Chunky" style figures!  There is no grumpy carney on this toy...but one of the riders looks like one.  Check out your local Target for one today!
Posted by Prescott Rymon at 9:59 PM No comments:

Prescott Rymon
Who is Prescott Rymon? Well we love most things Disney, buildings, and old toys. PRESley(Eldest Son) also has a Toy blog and SCOTT(Father) also has an architecture blog. RYker(Youngest Son) is a toddler but hopefully he will one day join in the fun. MONica(Mother) contributes to our family Disney Blog.